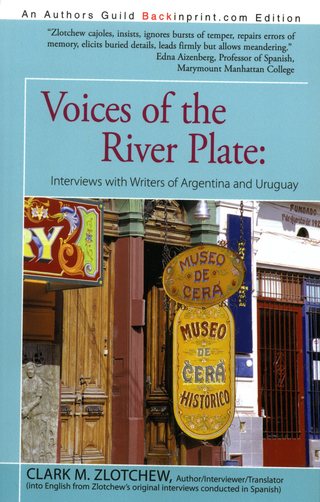 "Literacy and orality rub each other in the conversations: the professor knows his stuff but rarely assumes an academic tenor...

"He captures for an English-language audience the conversational personalism of River Plate culture, a quality not always evident in written works."

This book contains the author's English translation of the interviews he conducted in Spanish with Jorge Luis Borges, Marco Denevi, Antonio Elio Brailovsky, Fernando Sorrentino, Enrique Cadicamo, Jose Gobello and William Shand in Buenos Aires, Argentina, and with Julio Ricci in Montevideo, Uruguay in 1984 (Part I: Voices of the River Plate). It also contains Zlotchew's 1991 interviews in Tel Aviv and Jerusalem, Israel, with three writers born in Argentina who still write and are published in Spanish in Israel: Leonardo Senkman, Samuel Pecar and
Jose Luis Najenson (Part II: From the River Plate to the River Jordan).

Jorge Luis Borges, Marco Denevi, of an older generation, and Antonio Elio Brailovsky, Fernando Sorrentino and Julio Ricci, of a younger generation, are writers of fiction, whereas Enrique Cadicamo is the lyricist for hundreds of the beloved tangos. Jose Gobello, historian, etymologist of Argentine colloqial speech, author of numerous books, is the founder and President of the Academia Portena del Lunfardo, an organization that performs research into Buenos Aires colloquial speech and tango lyrics, which, during the classical period of the tango, contain that kind of language.

Samuel Pecar and Jose Luis Najenson are writers of fiction, while Leonardo Senkman is a historian. The interviews in Israel were made with gas mask and anti-nerve gas kit in hand just days before the outbreak of the First Gulf War (January 1991) and the subsequent missile attacks on Israel by Saddam Hussein.