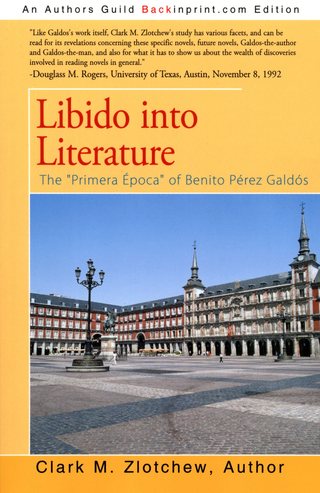 Libido into Literature: The "Primera Epoca" of Benito Pérez Galdós

"Like Galdos's work itself, Clark Zlotchew's study has various facets and can be read for its revelations concerning these specific novels, future novels, Galdos-the-author and Galdos-the-man, and also for what it has to show us about the wealth of discoveries involved in reading novels in general."
Douglass M. Rogers, University of Texas, Austin (November 8, 1992)

The present volume is a psychological-biographical-literary study of the self-contained series of novels of the formative period of Benito Perez Galdos as a novelist. It traces the thought patterns and illuminates the creative process of the greatest Spanish author of the movement known as Realism.

These early novels represent a period of artistic apprenticeship as well as of ideological struggle within Galdos's mind. Many of the preoccupations that would surface throughout the author's more mature work can be seen in their embryonic form in the novels of the Primera Epoca. Galdos's concern with the dynamic interplay of individual, society, and nature is constant throughout his career as a novelist. Libido Into Literature traces his ideas with reference to this relationship from La sombra and La Fontana de Oro, in which they first appear, through Marianela, in which a sharp change of focus occurs, to La familia de Leon Roch, in which these ideas become solidified.

Both the constants that can be seen in all these early novels, and the shifting patterns become interwoven into one fabric in the final novel of the early series, and emerge from it with this complex pattern to continue, to develop further, and to expand in the richer warp and woof of the later series, the Novelas contemporaneas.

But the major thrust of this study is not merely to register the themes and thought patterns underlying the novels of Galdos's earliest period, but to delve into the manner in which this great writer creates literature --which is social and political on the surface-- out of instinctual drives and unconscious psychic material.

This book also elucidates the imagery, the symbolism, the evocative language, the biblical and mythical motifs, in short, the rich battery of literary devices by means of which Galdos converts libido into literature.