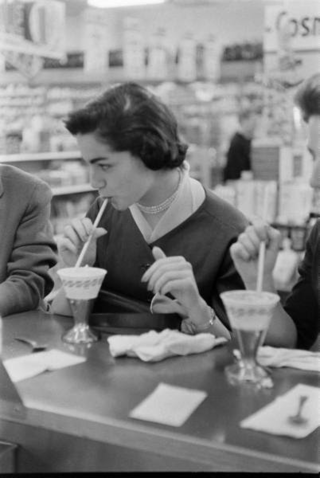 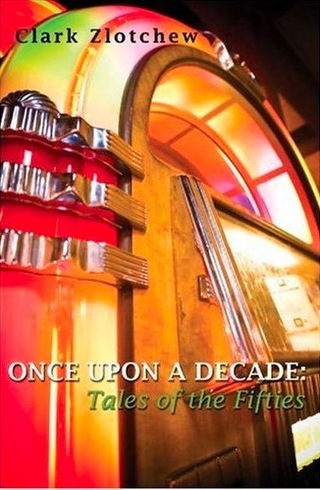 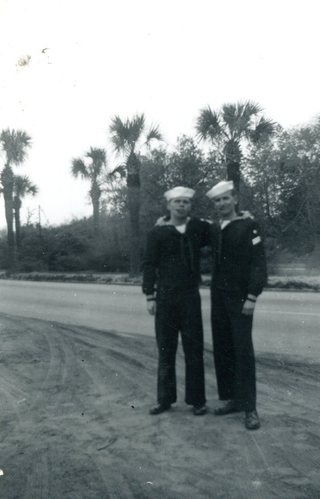 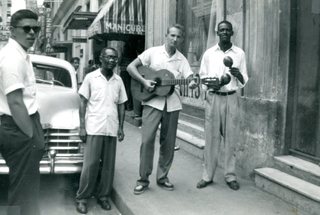 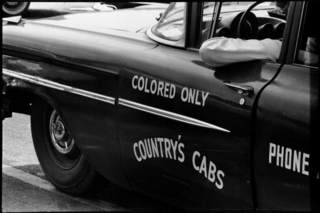 Segregated taxi in Deep South in 1962 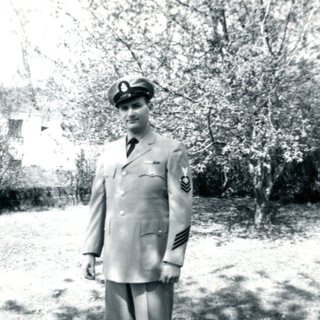 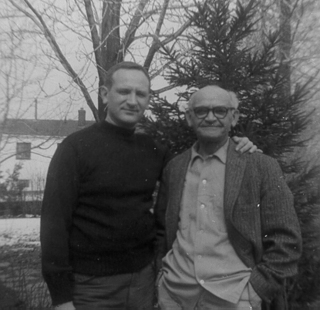 The author with his father Harry circa 1959 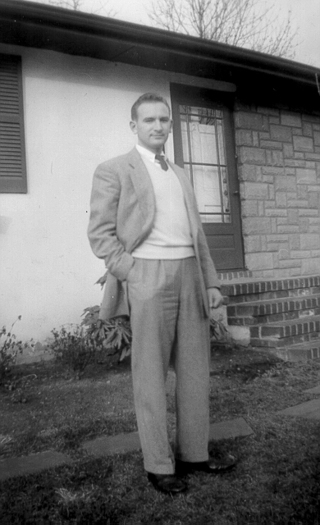 Once Upon a Decade: Tales of the Fifties

A man with a tortured psyche keeps a pink teddy bear on his food tray as he watches the Olympics on TV. A waitress in New Jersey puts a curse on a sailor; his behavior becomes increasingly irrational. Two shipmates --one white, one black-- learn firsthand about segregation in 1950s Savannah. A sailor who wants no more complications in his life falls in love with a young prostitute in Havana on the eve of the Castro Revolution. A timid adolescent boy suffers the pangs of unrequited love. A young high school teacher attempts to withstand a female student’s powers of seduction. An academic meets Jorge Luis Borges and uncovers the mystery of an American writer with three different names. A high official in a banana republic uses a military man to help overthrow the President, but his plan takes an unexpected turn. These are the premises of just some of the 17 stories in this collection. Almost all of the narratives take place against the background of the 1950s, a very different culture from that of the present.

Once Upon A Decade is a treasure-trove of small -- but highly polished -- literary gems of great depth and variety. The author seems capable of creating whatever mood he wishes, sympathetic and not-so-sympathetic characters unusually richly drawn, evoking a complex web of emotions: tension and heartache, love, hope and beauty, longing, fear and loathing. Some of the stories contain elements of humor and quite a few involve action and adventure, but one of the more surprising aspects of this short story collection is the wide variety of characters and settings for these tales, despite their unifying milieu: the 1950s. The author's gift is that he is equally adept describing the desperation of an attractive young striving actress in Hollywood, the friendship formed between sailors of different races (with a growing realization by the white sailor that irrational prejudice could put a damper on an evening's plans), the desperation of a blue-collar worker with an abusive streak and delusions of grandeur, and the ennui and loneliness of a woman unwilling or unable to admit a failed sham of a marriage. These are only just a few of the many interesting personalities we are confronted with in this collection. Just as fascinating are the mix of settings and predicaments the protagonists on these pages must come to grips with, whether it is the curse of a waitress on her customers, the bar/brothel of a Cuban refuge for American sailors, the angst and uncertainty of inexperienced love and infatuation, the just desserts for an unfaithful public servant, or the mystery of a now-deceased author's choices of subject matter and an apparent denunciation of his own identity. The author has managed to both entertain and produce stories that are deserving of further thought and analysis, for there are multiple interpretations in many of these stories, which cannot be easily forgotten. (END of review)

By Delin Colon (Ocean Shores, WA) - See all my reviews
(REAL NAME) This review is from: Once Upon a Decade: Tales of the Fifties (Paperback)

Good short stories have an emotional impact that conveys the essence of a psyche, time, place, and people. Author Clark Zlotchew accomplishes this in spades. Once Upon a Decade: Tales of the Fifties is a collection of short stories, linked by the mindset, politics, events and social constraints of that era. Many of the stories share the same characters, at varying ages during the decade, imbuing the reader with a sense of familiarity.
The fifties were a time of racial segregation, the Korean War, Castro's overthrow of the Cuban government and, preceding the sexual revolution, rigid gender roles and sexual taboos. Young men feigned machismo and sexual experience, to conform to `manly' standards. Young unmarried women proclaimed their virginity, even when nonexistent, to avoid social disgrace. All of these elements are contained within the confines of these stories.
Zlotchew gives us several glimpses of coming-of-age in the fifties, from a little boy's first experiences interacting with girls and a teenager's angst over unrequited love, to the peer pressure of young men to live up to a `manly' standard and the fear of not doing so. There is the paradox, for the male and female characters, of trying to conform to social norms, in order to be accepted by others, while trying to break away from them for the sake of sanity.
Racial tensions in the South are depicted when a naïve white sailor learns the hard way about the convention of segregation, when he wants his black buddy to go on shore leave with him. The story of turbulence and subterfuge of a Latin revolution adds an additional socio-political layer to the psychological and social chaos of the era.
There seems to be a progression from an initial innocence, to an increasing disillusionment with life, that is dealt with in varying ways by the characters. Dreams and expectations are dashed, on personal, social and political levels, giving a sense of universal upheaval and uncertainty. Some handle it better than others. Whether lost or shaken up by events, the characters are all searching for sure footing on ground that keeps shifting under their feet. As in life, some find a way to keep their balance on unstable ground, and others don't.
One story, about an absolutely reprehensible character, has an ending so powerful that it changes the reader's disgust to pity for that lost soul. While many of the stories prompt a shift in the reader's perspective and sentiment over the course of the tale, "Going for the Gold" is notable for it in the extreme, while others are more subtle.
These incisive slices of life in the fifties (some in retrospect) yield a much more realistic snapshot of the times than the Father Knows Best or Ozzie and Harriet TV shows reflected. For those of us who were there, these stories are poignantly nostalgic and remind us how far we've come, even if we still have a long way to go. For those who did not live in the fifties, they are a fly-on-the-wall view of what went on in the lives, minds, and hearts of those who did.
Zlotchew is especially skilled in crafting these short gems in each of which he manages to stuff an entire world. I highly recommend Once Upon a Decade: Tales of the Fifties, as an educational experience, on many levels.

Or, just go to Amazon Books, then Zlotchew.

The narratives in this collection paint a picture of an era etched in the soul of those who lived through the 1950s. It also opens the eyes and the imagination of their children and grandchildren, to whom this lost civilization will appear quaintly alien on the surface, but intensely familiar on a more profound level.

Many of the elements of this culture will repel: racism, sexism and homophobia, for example. Women were often objectified as nothing more than a means of creating pleasure and/or children for a man. Their influence ranged from minimal to zero in business and politics. Racial segregation was strictly enforced in the Deep South. Out of fear, those with same-sex orientation would do all in their power to hide this fact. These ugly elements are reflected in many of the stories of this collection.

Yet this was an era in which the threat of terrorism did not exist for the average American. The plagues of AIDS, Ebola and SARS were unheard of, and penicillin was the magic elixir that would cure whatever ills presented themselves.

In the fifties there were no computers, faxes, email, video games or CDs. At the opening of this period, television was just beginning to become the indispensable household appliance it is today. People wrote by hand, or with a typewriter, using carbon paper to make copies. Premarital virginity was of supreme importance, and unwed mothers were relegated to the margins of society. Divorce was stigmatized and comparatively rare.

It was a world in some ways more cruel, more demanding, less forgiving. In other ways it was safer, more secure, more comfortable. It certainly was different from the present. Yet, our basic nature has remained unchanged since humans became humans. The deepest of needs, beyond basic sustenance –love, sex, respect, self-esteem, power— always lie just below the surface as motivating forces. It is only the physical, political, social and moral strictures --fleeting conditions that channel those primary drives-- that change.

The vanished society of the Fifties is the setting for fifteen of the seventeen narratives in the present collection. As a whole, these stories deal with love and death, triumphs and defeats, adolescent angst, possible witchcraft, and the tension between ethnicity and assimilation. Some present adventure on the high seas as well as a glimpse of Havana night life on the eve of the Castro Revolution.