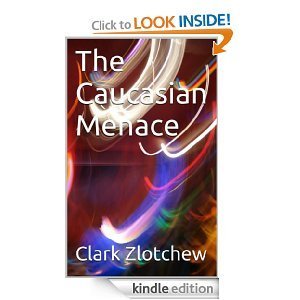 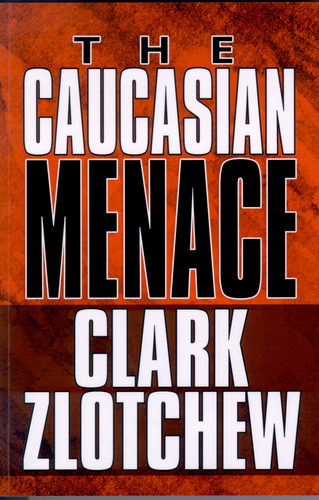 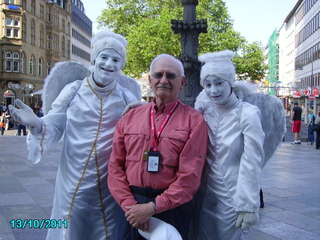 Zlotchew with angels in Cologne, Germany 2012

This thriller novel has political intrigue, espionage and fast-paced violent action centering on a remote but troubled corner of the Russian Federation.

NOTE: The central action of this thriller takes place in Daghestan. This novel was published in 2010, when very few Americans had ever heard of this region. The Boston bombings at the Marathon of 2013 were carried out by two brothers raised in Daghestan.

The Caucasian Menace, is an espionage/ thriller that concerns Daghestan, which has broken away from the Russian Federation and has missiles with nuclear warheads. The dictator is intent on selling some of these to Iran and Libya and/or terrorist groups. He also holds a Russian nuclear physicist he intends to sell.

To prevent interference with his plans, the dictator has nuclear missiles trained on key European capitals. Neither the U.N. nor NATO will take action. The United States, wishing to avoid a nuclear disaster, cannot take overt action. CIA operatives Baker and Gold are assigned to the case.

Due to an increasing series of setbacks –attempts on his life, infidelity of his young wife, among other problems-- the Dictator grows progressively more unstable, more liable to push the fatal button. Baker and Gold are in a race against time.

Complicating matters, Baker’s wife had been tortured and murdered years before by Thorne, the sadistic mercenary now employed by the dictator. Gold fears that Baker may have killing Thorne as his top priority, rather than capturing him for questioning.

Meanwhile, William Bell, their immediate superior, has been selling information to the dictator that could result in the deaths of Baker and Gold as well as the failure of the mission. This would cause worldwide catastrophe.

DAGHESTAN IN THE NEWS:

NOTE: This novel was published in 2010, when the average American had never heard of Daghestan. In April 2013 the BOSTON MARATHON BOMBING was carried out by two brothers who were raised in Daghestan.

Daghestan may sound unfamiliar to most Americans, but it is an actual republic within the Russian Federation, right next door to Chechnya. Chechnya has been devastated by its war with Russia, and has been radicalized by Salafis from Saudi Arabia into a Muslim Jihad center. this war often spills over into Daghestan. Daghestan itself is 90% Sunni Muslim but has not been extremist. This seems to be changing recently. Daghestan contains many different ethnic groups and 36 different languages and dialects. There often is tension among these groups.

News from the North Caucasus region of Russia is severely censored, so that it is difficult to know what is happening there. Yet there are occasional bits of news that leak to the outside world. RIA Novosti (Moscow, 4-12-2010) reports a whole series of violent clashes between militants and police in Daghestan, as well as the creation by Russian President Medvedev of a special anti-terrorism task force for the entire North Caucasus Federal District.

The English-language page of the KAVKAZ CENTER website, which is affiliated with Chechen JIHADI elements and the CAUCASUS EMIRAT E, is running a notice calling on its "volunteers." The notice links to a form on the website for applicants to fill in and submit. Also on the website is a "Donate Now!" button.

As reported in MEMRI Inquiry & Analysis No. 805, Jihadi News Agency 'Kavkaz Center,' Affiliated With the Designated Terrorist Organization 'Caucasus Emirate,' Tweets Jihad and Martyrdom, published February 24, 2012, the jihadi news agency Kavkaz Center, established in 1999, states on its website that it is an online Chechen news agency reporting on events in the Caucasus, Russia, and the Islamic world, in English, Arabic, Ukrainian, Russian, and Turkish. Banned in Russia, the website posts content encouraging and glorifying violent jihad in the Caucasus and elsewhere. Although it purports to be an independent news agency, Kavkaz Center is closely affiliated with the Caucasus Emirate (CE), a jihad organization operating in Russia's Caucasian republics, and has posted videos featuring messages from and interviews with its leaders. The website has also featured exclusive information on developments in the CE, which could only have been obtained through close ties with CE operatives. In May 2011, the CE was designated a Terrorist Organization by the U.S. State Department under Presidential Executive Order 13224; a year previously, its leader Dokku Umarov had been designated a wanted foreign terrorist.[1]

Kavkaz Center has requested donations via its website before. On December 12, 2012, the Islamic Center for Research and Security Studies (ICRSS) blog reposted an appeal for financial support which originally appeared on the Caucasus Emirate (CE) affiliated website Kavkaz Center (KC). In its appeal, KC wrote that its editorial staff would appreciate "any financial help" from individuals or organizations, whether they made a one-time contribution or become "permanent sponsor[s]" of KC.[2]

A November 2010 issue of Time Magazine, under the "Briefing" section, reports a Chechen attack, using explosives and rifle fire, on its pro-Russian parliament. The article adds, "There also been increased militant activity in the neighboring North Caucasus republics of Ingushetia and Dagestan."

In a recent poll, among the findings are the following: “An absolute majority of the young people questioned – 74.5 percent – consider the religious situation in the republic to be tense and conflict-ridden.” And they say that this reflects the introduction of new religious movements and “the struggle of various religious organizations to increase the number of their followers.”

DECEMBER 27, 2013: From Mideast translation service MEMRI: (Note: "The Caucasus Emirate" is an organization that hopes to unite the entire Caucasus region into a Muslim emirate. This region includes Daghestan. CZ)

Note to media and government: For a full copy of this report/video, send an email with the title of the report in the subject line to media@memri.org. Please include your name, title, and organization in your email.

On December 27, 2013, the website posted a video titled "Appeal by the Anonymous Caucasus #OpPayBackForSotchi2014." The "Anonymous Caucasus" describes itself as the "electronic army of the Caucasus Emirate" and has a website and accounts on Twitter and Facebook. In this video it warns the Russian government to stop its "activities" in Sochi (presumably the preparations for the Winter Olympics), otherwise the group will launch a cyber war against it in retaliation for the "Circassian genocide."
The video, which is two minutes and 31 seconds in duration, shows still images of signs in English that read: "Putin, don't build your credibility on Circassian graves"; "Sochi 2014 – the hidden genocide"; "You'll be skiing on the mass graves"; "2014 Sochi Olympic winter games – Circassian genocide 150 anniversary".
The message is delivered by an unseen announcer. The following are excerpts:
"Our message is addressed to the government of the Russian Federation and to all the supporters of the [Winter] Olympics in Sochi. You are spending millions of dollars to organize these games on the land of the Circassians, on the land where their entire people was cruelly annihilated, on the land of the 1864 genocide.

Note to media and government: For a full copy of this report, send an email with the title of the report in the subject line to media@memri.org. Please include your name, title, and organization in your email.
To view this report, you must be a paying member of the Jihad and Terrorism Threat Monitor Project (JTTM). For membership information, send an email to jttmsubs@memri.org with "Membership" in the subject line.
A video posted January 6, 2014 on Vdagestan.com website features the last statement of Rajab Abu Yusuf, apparently a mujahid from Dagestan who fought in the Caucasus. His message, which is addressed to his parents, focuses on convincing them not to be sad or angry over his choice of becoming a mujahid – because thanks to this choice both he and they will attain Paradise. He also admonishes his parents for not being believers and implores them to repent and become "monotheists."
Abu Yusuf stresses that "our enemies", the leaders of Russia and Dagestan, are lying when they pretend to enforce law and order, for they are corrupt and the society they rule is therefore a sick society. He says that on the battlefield of jihad he finally feels free, for he is no longer dependent on the enemies of Allah who are like beasts. Finally, he asks his parents to convey a message to all their friends and relatives who serve in the security forces, namely that they must resign – otherwise they will fight him and he them.
The last few seconds of the video show a dead body – apparently the speaker himself – lying on a table.

Rajab Abu Yusuf in the video

BEHEADINGS: If you have the stomach for it, see the YouTube video "Religion of Peace: The Dagestan Beheading Massacre." It is a horrifying 14-minute video of Chechens in Daghestan beheading, cutting throats, of Russian soldiers who were POWs. It is done leisurely, sadistically, slowly, partially cutting off heads, victims still alive, laughter heard in background. Caution, truly horrifying.

Qadi Of The Dagestani Emirate: Women Must Not Leave The House, Not Even To Pray Or Wage Jihad

On December 3 the jihadi website Vdagestan.com posted a video titled "Instructions for the Sisters from the Qadi of the Dagestan Emirate, Abu Othman." In it, the qadi advises women not to step out of their homes under the pretext of participating in jihad, and enumerates the conditions under which a woman may leave the house.

The exciting and often violent events that take place in THE CAUCASIAN MENACE are strictly fictional, but not impossible or even improbable.