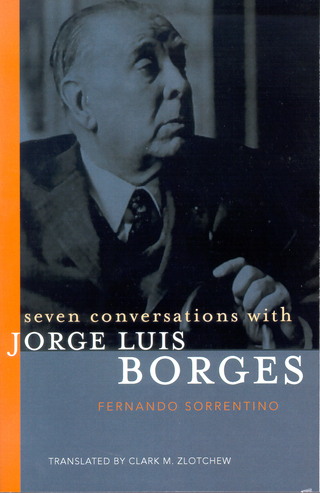 Jorge Luis Borges is considered by a great number of literary critics to be the most eminent Latin-American writer of the twentieth century. Many think of him as the most important author of Spanish language of the 20th-Century. Translated into all the major tongues, his poetry, essays, and short fiction are among the most important pieces of modern world literature.

Renowned Borgesian scholar Donald Yates has called these dialogues with Borges the best book of its kind, the one that provides the most reliable picture of Borges derived from tape-recorded conversations with him. The same critic finds in these interviews an exceptionally open and intimate tone.

The original conversations in Spanish were recorded on tape in 1972 and published in 1974 in Argentina but, because of the overly frank tone of Borges’ political statements, could not be commercially distributed until after the overthrow of Isabel Perón in 1976.

Dr. Zlotchew said, “A series of interviews even with the most talented author can result in a bleak succession of banalities that prove to be a disappointment for the avid fan.” He added, “A great deal depends on the skill of the interviewer. Fernando Sorrentino did a great job. He himself is a prolific and talented writer, and at the same time loves the work of Borges, and knows it well. What results from this is a warm and personal glimpse of one of the most fascinating figures of 20th-Century world literature.”

In this book, Borges wanders from nostalgic reminiscence to literary criticism and from philosophical speculation to political pronouncements. His thoughts on literature alone run the gamut from the Bible and Homer to Hemingway and Cortázar. We learn that Dante is the writer who has impressed Borges most, and that Borges considers García Lorca to be a “second-rate poet.”

Borges dwells lovingly on his home town of Buenos Aires, too. As in his prose and more often in his poetry, in these pages Borges refers to the outskirts of the City and to the denizens of those humble quarters who existed during Borges’ childhood. “In fact,” said Zlotchew, “you could say that when Borges refers to the Buenos Aires of his youth, with its shanty town outskirts inhabited by European immigrants and former gauchos from the Pampas, its knife fights and saloons garishly painted red or blue, he’s referring to a Buenos Aires that no longer exists. This was a harsh world in which a man was quick to reach for his knife at the slightest perceived insult.

This will seem strange to modern Americans, but it was a world in which these same men would dance the tango in the street with each other (no decent woman would be seen dancing the ‘shameful’ tango).”

Today’s Buenos Aires bears little resemblance to that of Borges’ youth. “It’s a city that Borges has never seen, literally, even though he lived in it,” added Zlotchew, “because he was blind the second half of his life.”

This Paul Dry publication of Seven Conversations with Jorge Luis Borges is a paperback edition of Zlotchew’s hard cover book published by Whitston Publishing in 1982. Zlotchew had supplied that edition with twice the number of notes contained in the Spanish original and added an Index of Hispanic Personalities Mentioned by Borges for the benefit of the North American reader. Since that time, Sorrentino’s interviews in Spanish had gone through three more editions, to which Sorrentino kept adding notes while correcting older ones. Zlotchew had to translate those additional notes and corrections and meld them with the notes of the older edition. “It was very complex, and very time-consuming,” he said. It took me about three months while teaching my classes in the Spring 2009 semester. But it was worthwhile.”

M.A. Orthofer, in The Complete Review 3-24-2010, agrees, saying, “An informative (and readable) set of quite casual conversations, Seven Conversations with Jorge Luis Borges is a very useful book in providing background information about Borges, especially about his literary tastes and opinions."